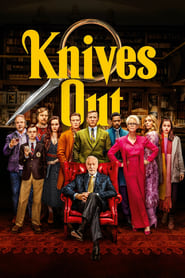 Tagline: Hell, any of them could have done it.

Plot: When renowned crime novelist Harlan Thrombey is found dead at his estate just after his 85th birthday, the inquisitive and debonair Detective Benoit Blanc is mysteriously enlisted to investigate. From Harlan's dysfunctional family to his devoted staff, Blanc sifts through a web of red herrings and self-serving lies to uncover the truth behind Harlan's untimely death.

LV
0
I watched this last week and it was great - so clever!

Snap! I watched last weekend too (and twice since) The director, Rian Johnson, on YouTube, has some fascinating explanations on his writing and directing (man he put a lot of thought into this). Did you know, apparently Apple won't allow "a baddie" to hold an iPhone in any movie?
You must log in or register to reply here.
Share:
Facebook Twitter Reddit Pinterest Tumblr WhatsApp Email Share Link
Menu
Log in
Register
Install the app
Top