Reality Check Back up your Work!

Full Member
LV
0
As part of adjusting settings on my WordPress blog, I backed up what I'd already done with a plug-in widget. Hackers love attacking WordPress, so this was a wise move.

Feeling virtuous, I decided to check when I'd last saved my precious crime novel series to the cloud. I thought it was late last year, which is too long ago, considering the amount of work I've put in recently editing, formatting and designing book covers in preparation for self-publishing on KDP. I almost fell off my chair, when I saw that the last time I'd visited Microsoft's OneDrive was in 2015! That meant I didn't have copies of my last two novels.

Feeling like an idiot, I checked two memory sticks, finding early drafts of those books, but not any completed versions.

I should know better, for in 2006 my old laptop had its hard drive shattered into a hundred fragments when a lightning bolt hit the farm where I was living. It loosened huge stones in a barn wall before travelling 20 yards through the ground to my cottage. It blew two light bulbs into pieces, as well as frying the surge protector extension lead powering my computer. I was lucky not to be electrocuted for I had the laptop on my lap at the time—my goolies could have been flash-fried—great balls of fire!

I lost 18 months of writing, research and many pictures of my cat Pushkin, who had recently died, so it was quite upsetting. That's one of the problems with digital records, not only documents and photographs but stuff like music, where we transfer everything to our computer or iPod. If you don't keep hard copies, you've lost everything.

I use OneDrive and Dropbox, but need to be conscientious about backing up my work. It only takes seconds to do and provides peace of mind.

5 Ways to Back up Your Data and Keep It Safe

How do you save your work?

When did you last do so? 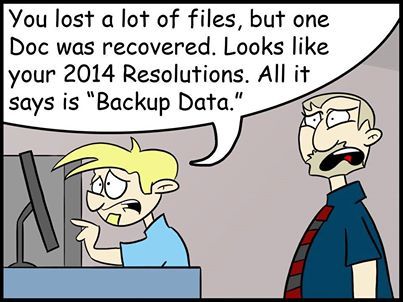 Full Member
Emeritus
LV
0
I use Google Docs, which saves everything to Google Drive as you type. I also make sure that 'Make available offline' is checked, which ensures that the latest version of a document is also saved locally on the last device used to access it. I write on a desktop PC, a tablet and my phone, so on whichever of those devices I last used, there will be a copy of the latest version (as well as the copy on the cloud). Accessing the doc from another device will immediately update the locally saved version on that device as well.

TLDR: Google Docs backs up as you type. Works for me.

LV
0
Besides the above, I email a copy to myself.

Yes, been bitten, save every week to external hard drive, copied to a second external hard drive stored off-site, with current work backed up to stick (x2, of course).
Once you've lost a whole mss, especially when it was nearly ready ...

And I email stuff to myself all the time, even as a 'draft' and never sent - these also go into the weekly backup.
Overdoing it? Not at all. Not at all.

OMG Paul! What an experience, core message notwithstanding. And, my sympathies. God bless pussy cat Pushkin. These 'small' animal deaths are a very poignard to the heart.

LV
0
Memory sticks, lots of them. They are relatively cheap and easy to store. (Also easy to lose, but that's another issue.)
I usually have several sticks handy, one I carry around with me with my laptop and I back up onto it after every writing/editing session, one goes in a fireproof safe and is updated weekly. They don't last forever though, so I buy new ones regularly.
I also have a tendency to print my MS out at various stages after edits and bit by bit as I'm writing it. So I'll always have a fairly recent paper copy somewhere in a plastic file.
I don't yet trust cloud storage enough to rely on it, I'm also very wary about it's security.
Hard disks can (and often do) fail without warning, even SSDs, don't rely on them.
Confuscious, he say, put not all your eggs in one basket!

Full Member
LV
0
I use Time Machine--it backs up my entire computer automatically every hour to a hard drive in a different building from my office. When I'm getting close to the end of a book, I start putting weekly updates in Dropbox, and I always make sure the final copies are in Dropbox as well.

Everything I type is saved as I type by Scrivener and my Scrivener file is in the cloud (Onedrive). I've lost a previous draft of the book I'm writing, so I check randomly to make sure this is still working. Whilst losing work is a kick in the gut, it is an opportunity to write something fresh and new with what you've learned since you wrote the lost work. Especially, as writers, we're always learning.

Still, knowing this doesn't remove the initial sting of lost work (especially research), sorry you had to experience this @Paul Whybrow