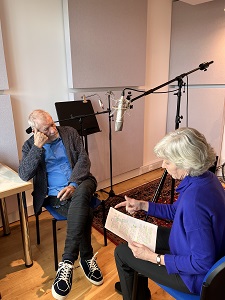 Sir Ian McKellen is to narrate Michelle Paver’s Wolfbane, 'the thrilling climax to Michelle Paver’s award-winning Wolf Brother adventure series.'
Wolfbane will be published by Head of Zeus imprint Zephyr in hardback, e-book and as an audiobook next Tuesday (26 April). McKellen has narrated all nine books in the multi-million copy selling series, starting in 2004 with Wolf Brother.
The eighteen-year association has been described as "a dream come true" by Paver, who has attended every day's recording of all the books, from Wolf Brother to Wolfbane. The audiobook will be produced by WF Howes in collaboration with the publisher.
McKellen said: "Like other great children's books which also entrance adults, Wolf Brother conjures up an utterly believable yet original world where the story grips you to the very last page."
Paver said: "It has been a privilege to be present at every one of Ian's recordings of my books. His ability to evoke the Stone Age world is spine-tingling. Ian genuinely is a twenty-first century Mage."
Habiba Sacranie, audio acquisitions editor at WF Howes, said: "I have loved working on the final part of this series and it is great having Sir Ian finish the narration which he started back in 2004. Michelle's incredible series has been brought to life through his understanding and skilful narration."
According to the publisher: 'Wolfbane is pure escapism at its best. The end of winter is a perilous time when ice rots and frozen rivers wake. Wolf finds himself adrift at Sea, far from his pack and hunted by an ice demon bent on devouring his souls. While Wolf battles hunger, loneliness, and the monsters of the deep, Torak and Renn must find him before the demon can -or lose their beloved pack-brother for ever.
'Wolfbane is the exhilarating conclusion to the Stone-Age adventure that began with Wolf Brother and has enchanted millions of readers around the world.
'Michelle Paver is an international bestselling author with over 3 million copies of her Wolf Brother series sold worldwide in 36 territories. She was born in Malawi and came to England as a child. She studied Biochemistry at Oxford University, before becoming a partner in a City of London law firm.
'After resigning from that position, she turned to writing. She has never looked back Michelle is known for her meticulous research, from her encounters with wolves for the first book, Wolf Brother, to her most recent research trips to the Alaska, British Columbia and Outer Siberia for Wolfbane. She has explored ice caves, swum with killer whales, tracked musk-oxen and crawled into a grizzly bear’s den.'

Full Member
LV
0
I’m definitely gonna ask him to read my book one day. Even in the bath, quietly to himself, that’d do it!

It would be fun to walk in her footsteps, but I'd maybe skip crawling into a grizzly bear's den.

I've seen Sir Ian on stage way back. The Scottish play with almost no scenery. He was spellbinding.

Hannah F said:
It would be fun to walk in her footsteps, but I'd maybe skip crawling into a grizzly bear's den.

I've seen Sir Ian on stage way back. The Scottish play with almost no scenery. He was spellbinding.
Click to expand...

We watched him do that on the telly at school, I think. Also seen him in Waiting for Godot in London, and with Patrick Stewart in No Man’s Land here in Brighton a few years back. Like you say, Hannah, he’s spellbinding. As if Gandalf wasn’t enough!

He's a lovely person, too. A friend of mine from the same part of Lancashire wrote to him when he (my friend) was starting off in acting and got a really personal letter of encouragement, back.

So Exciting! Michelle must be over the moon!